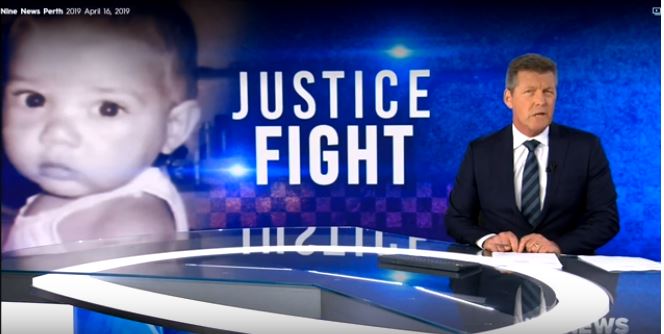 How a domestic violence call to police led to the arrest of the victim, her father, and the death of Baby Charlie

When Police responded to a call out about a domestic violence incident involving Tamica Mullaley – they found her beaten, bloody and naked except for a sheet that a bystander had given her.

The Police knew the identity of the offender – Mervyn Bell – as they were told his name soon after they arrived.

Tamica was distressed, traumatised, suffering serious internal injuries and she told the Police she didn’t want to speak to them at that time, but they continued to pursue her for further information about the assault. The Police interrogation of Tamica – in public, while she was still naked and covered only with a sheet, goes against everything that we know about assisting traumatised and distressed domestic violence victims. Tamica’s refusal to engage with the Police led to an argument with them and ultimately to Tamica and her father, Ted’s arrest for obstructing police.

After the indignity of being brutal bashed by her then-partner, Tamica was dragged, kicking and screaming, into the back of a police van.

During the melee Ted asked a police officer to care for Tamica’s 10-month-old baby so that he could assist his daughter and ensure that she received medical care.

The officer refused and Baby Charlie was left by the police at a place known to Tamica’s assailant, Mervyn Bell. A place where Bell would later return to seize Baby Charlie.

Despite pleas from Ted that Bell was going to “hurt the baby”, Police failed to initiate a search for Baby Charlie for over 10 hours.

When Baby Charlie’s body was found police discovered that he had been beaten, sexually abused and burned. Mervyn Bell was found guilty of murder and sexual assault of Baby Charlie and was sentenced to life imprisonment.

To add insult to injury, the police persisted with their charges against Tamica and Ted Mullaley who were later convicted of offences relating to their scuffle with Police.

The National Justice Project is acting for the Mullaleys and taking the WA police to court to stop vulnerable women and children from ever being treated like Tamica and Baby Charlie again.

Why is this case so important?

The circumstances of this case provide the opportunity for the broader community to truly understand the traumatic and sometimes fatal effects of discrimination in policing and the inappropriate first response of police to domestic violence calls.

The National Plan states that:

“Reducing all violence in our community is a priority. All forms of violence against women are unacceptable, in any community and in any culture. It is everyone’s responsibility to reject and prevent violence”.

While nearly all Australians (98 per cent) recognise that violence against women and their children is a crime, the prevalence of violence continues to be unacceptably high. In 2005, over 350,000 women experienced physical violence and over 125,000 women experienced sexual violence. Sadly, First Nations women and girls continue to be 35 times more likely to be hospitalised due to family violence related assaults than other Australian women and girls.

Yet, our first responders often respond to calls to assist First Nations victims of domestic violence with inadequate and inappropriate measures which lead to the aggravation of (rather than the de-escalation of) the traumatic events that these victims have endured. These inappropriate measures can and have led to further victimisation of the victims, and at times their death.

The NJP is representing the Mullaleys to create change. The NJP has launched human rights proceedings against the WA police in the Federal Court with the aim of providing some semblance of justice for the Mullaleys for the death of baby Charlie Mullaley, but more importantly to shine a light on the need for drastic reform in the way WA Police interact with the victims of gender based violence – particularly First Nations victims – and how the police should ensure the safety of their children at crime scenes.